These are events directly sponsored or supported by the Woods Hole Diversity Initiative and/or Advisory Committee. For other community events, visit our calendar. 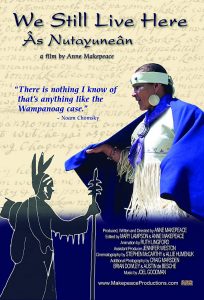 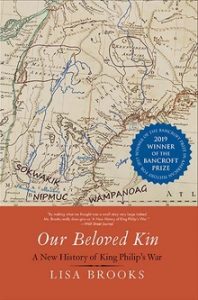 Where: Virtual & a space of your choice to Walk for Freedom 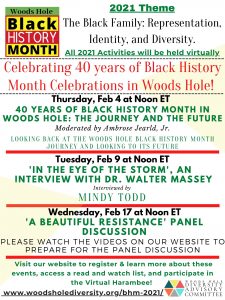 This year’s theme is "The Black Family: Representation, Identity and Diversity".

All events will be held virtually, including the Harambee. 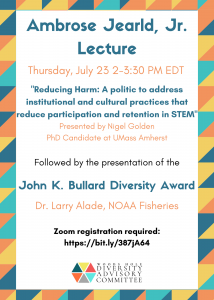 "Reducing Harm: A politic to address institutional and cultural practices that reduce participation and retention in STEM" Presented by Nigel Golden, PhD Candidate at UMass Amherst

Followed by the presentation of the John K. Bullard Award to Dr. Larry Alade, NOAA Fisheries. 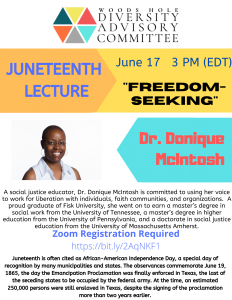 Unfortunately due to current restrictions all in-person Juneteenth events have been canceled. 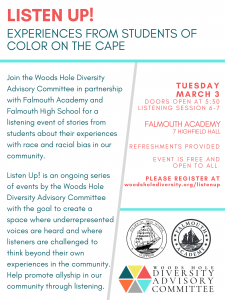 Listen Up! Experiences from Students of Color on the Cape

Join the Woods Hole Diversity Advisory Committee in partnership with Falmouth Academy and Falmouth High School for a listening event of stories from students about their experiences with race and racial bias in our community.

Listen Up! is an ongoing series of events by the Woods Hole Diversity Advisory Committee with the goal to create a space where underrepresented voices are heard and where listeners are challenged to think beyond their own experiences in the community. Help promote allyship in our community through listening. For more information about Listen Up! events, you can visit our Listen Up! page here.

This event is free and open to the public. 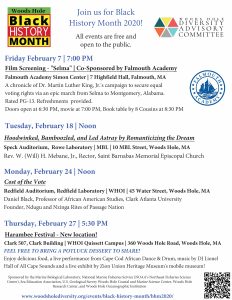 Where: Throughout Woods Hole and Falmouth 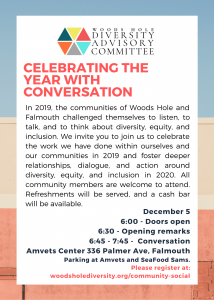 Celebrating the Year with Conversation

In 2019, the communities of Woods Hole and Falmouth challenged themselves to listen, to talk, and to think about diversity, equity, and inclusion. We invite you to join us to celebrate the work we have done within ourselves and our communities in 2019 and foster deeper relationships, dialogue, and action around diversity, equity, and inclusion in 2020.

Parking is available at the Amvets and Seafood Sam's. 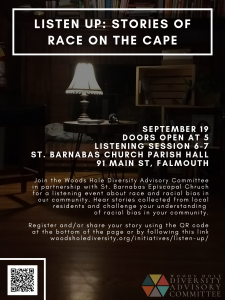 Listen Up: Stories of race on the Cape

Join the Woods Hole Diversity Advisory Committee in partnership with St. Barnabas Episcopal Chruch for a listening event about race and racial bias in our community. Hear stories collected from local residents and challenge your understanding of racial bias in your community. 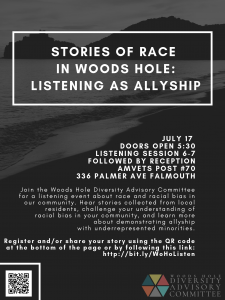 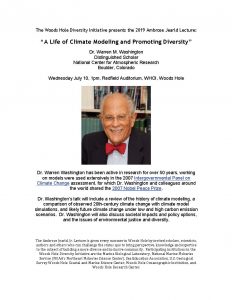 Dr. Warren Washington has been active in research for over 50 years, working on models were used extensively in the 2007 Intergovernmental Panel on Climate Change assessment, for which Dr. Washington and colleagues around the world shared the 2007 Nobel Peace Prize. 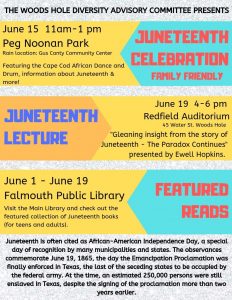 From June 1-19 visit the Main Branch of the Falmouth Public Library for a display on suggested readings.

On June 15, from 11AM-1PM join us at the Peg Noonan Park on Main St. in Falmouth to learn more about Juneteenth and participate in activities.

On June 19, from 4:30-6 PM (doors open and refreshments at 4) join us at Redfield Auditorium, 45 Water St. in Woods Hole for a lecture titled "Gleaning insight from the story of Juneteenth - The Paradox Continues" presented by Ewell Hopkins.

Juneteenth is often cited as African-American Independence Day, a special day of recognition by many municipalities and states. The observances commemorate June 19, 1865, the day the Emancipation Proclamation was finally enforced in Texas, the last of the seceding states to be occupied by the federal army. At the time, an estimated 250,000 persons were still enslaved in Texas, despite the signing of the proclamation more than two years earlier. 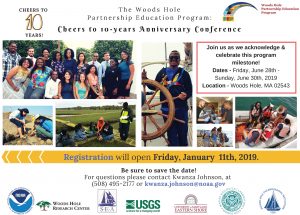 Optimizing the Intern Experience: A Woods Hole Workshop, Sponsored by NSF, with additional funding from the Woods Hole Diversity Initiative. The Road North: Why, When, & How Black People Migrated from the South

Lecture Abstract:
Dr. Daniel Black will discuss and illuminate the various motivations which drove hundreds of thousands of black people from the south to Northern centers such as Chicago, Detroit, Philadelphia, New York, Kansas City, Boston, and St. Louis. These reasons are varied and complicated, to be sure, but one thing is certain: Black people were in search of the American dream and meant to find it. Often, these migrants were young people who became the urban workforce, filling factories and doing domestic work for twice or even three times what they had made picking cotton or working tobacco fields. Yet the north did not turn out to be Heaven. To be sure, racism in Northern cities equal that in the south. Yet economic opportunities made most stay and hope for the best. In this presentation/speech/lecture, Dr. Black will share some of those specific experiences and speak of the historical context in which black Americans risked everything in search of a “livable” life somewhere between the trials and tribulations of the South and the nation’s burgeoning centers of the North.

Daniel Black is an award-winning novelist, professor, and activist. His published works include They Tell Me of Home, The Sacred Place, Perfect Peace, Twelve Gates to the City, The Coming, and Listen to the Lambs. In 2014, he won the Distinguished Writer’s Award from the Mid- Atlantic Writer’s Association. The Go On Girl! National Book Club named him “Author of the Year” in 2011 for his novel Perfect Peace. Perfect Peace was also chosen as the 2014 selection for “If All Arkansas Read the Same Book” by the Arkansas Center for the Book at the Arkansas State Library. The novel has been reprinted more than ten times and is being heralded as an American literary classic. Dr. Black has also been nominated for the Townsend Literary Prize, Ernest J. Gaines Award, Ferro-Grumbley Literary Prize, Lambda Literary Award, and Georgia Author of the Year Prize.

In 2012 Sharon Kennedy went on an extraordinary trip to Ghana and Burkina Faso. She and a friend traversed Ghana from the south to the north, and then into Burkina Faso, with a wonderful Ghanaian Muslim guide. It was very hot, the roads were bad, and the food was spicy, but the people were the friendliest she'd ever met.

Kennedy will present an hour long-show about this experience featuring Ghanaian folktales and songs. The audience will learn simple West African dance moves and easy-to-use instruments.

Abstract:
The United States is undergoing an energy revolution, from rooftop solar in to onshore wind and from energy efficiency to offshore wind. What does that mean for communities that historically suffer disproportionately from pollution from fossil fuel mining, refining, shipping, storage and burning? Likely a lot, from asthma to drinking water. Derrick Jackson, who has written extensively on the coming American offshore wind industry and on policies of the Environmental Protection Agency, will try to make those connections.

Derrick Z. Jackson is an award-winning journalist and co-author and photographer of the 2015 book, “Project Puffin: The Improbable Quest to Bring a Beloved Seabird Back to Egg Rock,” published by Yale University Press.

An ethnic feast celebrating everyone of every race! Guests are asked to bring a potluck dessert to share!

Cape Cod African Dance & Drum is an ensemble of dancers and drummers who practice traditional West African and Afro-Caribbean dance and drumming on Cape Cod and the New England area. This troupe includes master West African drummers, as well as a diverse group of professional American artists with a variety of dance and music backgrounds. The ensemble performs to uplift the hearts of their audiences, playing for the joy and healing inherent in African traditions.